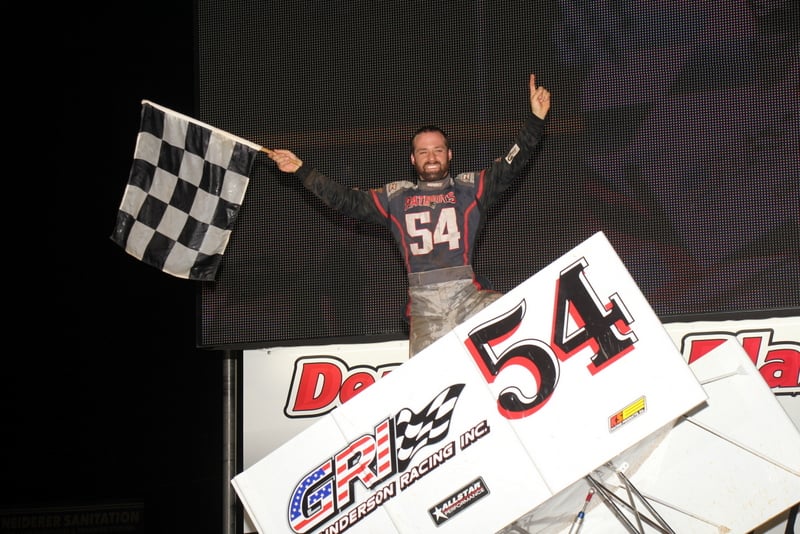 Abbottstown, PA (July 4, 2020) – Deaf driver, Brett Wanner, was on a rail Saturday night as he scored his first career 358 Sprint Car victory. Along with Brett, most of his crew is also deaf. In victory an elated Wanner shared some empowering words for the deaf community via an interpreter, “I’m proud. I’m deaf. We can do it. Deaf can do anything. I want to show people that the deaf can do it no matter what.”

CJ Tracy and Jordan Givler, who was making his first appearance at Lincoln this year shared the front row. Two-time winner this season, Todd Rittenhouse Jr. lined up third for the 25-lap feature with Kyle Denmyer to his outside. Brett Wanner started the main event in the fifth position.

Givler to the lead with Wanner moving up to second with a solid run out of turn 2. Wanner got by Givler in turns 1 and 2 but Givler took the top spot back down the back stretch. Wanner took the lead coming out of turn 4 on lap 2.

Wanner ran away from the field catching lapped traffic. Brett went to work weaving his way through lapped traffic when the yellow came out for John Sharpe on lap 8 who stopped on the front stretch.

The field lined up for a single file restart with Wanner leading Givler, Denmyer, Tracy and Rittenhouse to the cone.

Wanner went high on the restart with Givler running the bottom. The top of the track proved lucrative for Wanner as he once again pulled away from the rest of the field.

The red flag came out for Jake Galloway who ended up on his side in turn 2. Chris Arnold was also involved.

On lap 14 the field lined up behind Wanner for a single file restart. Wanner jumped out to a commanding lead once again ahead of Givler.

Zachary Allman came to a stop on the front stretch bringing out another caution. Kody Hartlaub came to a stop under caution due to a safety issue, his helmet had started to come off.

Rittenhouse got by Tracy using the bottom in turns 1 and 2 on the restart to take fourth. Wanner was on rails once again as the caution came out for Matt Findley who got out of shape in turn 4.

Rittenhouse challenged Denmyer for third on the restart and took the spot at the line. Denmyer tried to get in back in turns 1 and 2 on the next lap with a slide job but Rittenhouse held him off.

Jeff Rohrbaugh entered the top 5 after getting by Tracy as Wanner once again pulled away from the rest of the field.

Wanner bobbled in turns 1 and 2 on the final lap but his lead was large enough that it didn’t matter as he beat Givler to the checkered flag. Turns out Wanner had lost his brakes leading him to make the last lap misstep. Rittenhouse crossed the line third with Denmyer hanging on for a fourth place finish. Rohrbaugh completed the top 5.

Garrett Bard found victory lane for the third time this year with the PA Sprint Series on Saturday night with his win at Lincoln.

Derek Hauk lined up on the pole for the 20-lap 305 Sprint feature on Saturday night with Bard lined up to his outside.

Bard shot out to the lead using the high side to get around the track with Hauk on the bottom of turns 1 and 2. Hauk went to the top on the next lap to hold off Doug Dodson who was running third. Dodson got Hauk for second on the following lap.

Dodson went to the bottom of the track to try and track down Bard. The caution came out on lap 4 for pole-sitter Hauk after a mud clump got stuck under his throttle coming out of turn 4. Hauk ended up in the top of turns 1 and 2 pointing the wrong direction.

The field lined up behind Bard for the single file restart. Dodson, Jaremi Hanson, Johnny Scarborough and Kyle Keen were running in the top five.

Dodson went low trying to gain some momentum on Bard. Dodson had closed the gap on Bard and the two were nearly side by side at the line when the caution flag flew once again on lap 7 for Hauk as he sat sitting the wrong way in turn 2.

Bard got a good job and went to the top with Dodson sticking with the bottom to try and gain on the leader.

As the leaders approached lapped traffic towards the half-way point of the race, Dodson had reeled in Bard to battle for the lead. The two were once again side by side at the line with Bard taking the opportunity to move to the bottom of the track to hold off Dodson’s charge.

As Bard and Dodson continued to work through lapped traffic Dodson tried to capitalize Bard getting pushed to the top of the track as he got around a lapped car. Dave Brown who had worked his way to third also joined the battle for the lead as the laps wound down.

Dodson tried the top of turns 1 and 2 on the last lap and slid Bard in turns 3 and 4 in one last attempt for the lead. In an exciting finish, Bard held off Dodson for the win. Brown finished third. Hanson crossed the line fourth and Scarborough completed the top five.

Despite Corey Sechrist starting on the pole of the 20-lap Xcel 600 modified feature Saturday night it wasn’t easy sailing to victory lane. Sechrist shared the front row with Tyler James.

James dove into turn 1 ahead of Sechrist to lead lap 1 as a four car battle brewed for third behind the leaders. The caution came out on lap 1 for a car that got out of shape in turns 3 and 4.

The field lined up behind James for the single file restart with Sechrist in second, Korey Inglin running third, Jeff Sechrist fourth and Matt Warner fifth. Matt Yoder brought out the caution as the field was about to take the green once again.

James got an excellent jump on Sechrist when the green flag dropped. Warner got by Jeff Sechrist for fourth.

The caution came out again for as Steve Sterner and Brian Blankenbillar got out of shape in turns 1 and 2.

James once again paced the field for the restart. Matt Warner challenged Corey for second and took the spot. The two continued to battle with Corey not wanting to fall back to third. Warner solidified his second place spot and went to work on reeling in James.

Warner had gotten his nose under James to battle for the lead in turns 1 and 2 when the caution came out for Yoder.

Speedway officials noticed that Warner, who was running second, was putting fuel down on the track under the caution. That meant that Corey Sechrist inherited the second spot for the restart behind James.

James held off Sechrist on the restart and pulled away from the field. James came off turn 4 out of sorts and came to a stop on the track bringing out the caution on lap 7. This time Corey Sechrist inherited the lead for the restart as James’ night came to an end.

Sechrist led Inglin and Eric Whitby on the restart. Corey held the lead as Whitby battled Inglin for second behind him. Sam Sciccitano joined the battle for second and was about to take the spot when the caution came out for Shawn Bear.

Corey Sechrist led Inglin, Whitby and Sciccitano for the single file restart. Sciccitano went to the inside of Whitby but Whitby had other plans and drove door to door with Inglin.

Sechrist took the checkered flag ahead of a three-wide battle at the line for second. Inglin took second, Whitby crossed the line third and Sciccitano finished fourth. Jeff Sechrist rounded out the top five.

Bill Powell lined up fifth for the start and once he took over the lead he held off the field on five restarts to land in victory lane.

Kyle Emig and Austin Hogue shared the front row for the 20-lap Extreme Stock feature. Emig and Hogue raced side by side into turn 1 with Hogue taking the advantage going into turn 1 and leading lap 1. Powell got into second coming out of turn 2 and set his sights on Hogue.

The caution came out for Michael Smith who got out of shape at the exit of turn 4.

Powell was on Hogue’s bumper as the two circled the 3/8th mile oval. Powell was giving it everything he had to get a nose under Powell and he was finally got under him in turn 4 and raced door to door with Hogue edging him out at the line for the lead.

As Powell and Hogue raced away from the field a five way battle for third ensued between Tim Berkheimer, Justin Yohn, Emig, Will Long and Hunter Fulton. The caution came out when Yohn got spun around as the five drivers battled for position.

Powell led Hogue, Emig, Long and Berkheimer for the restart. Powell took the green flag with Hogue hot on his heels.

The yellow flag flew again. This time for John Wright.

Once again Powell paced the field for the restart. Hogue tried to get his nose under him as they went down the front stretch but Powell beat him into turn 1. Another caution came out before a lap could be completed with problems in turn 2 for Michael Smith, Andrew Hogue and Ron Grinestaff.

Hogue threw everything he had at Powell on the restart but to no avail as Powell continued to lead. The yellow flag came out for Ron Grinestaff who was off the pace and Yohn who got spun around in turn 4.

Powell once again held off Hogue on the restart. Hogue kept within striking distance of Powell and nearly got under him when Powell got high in the turns.

Hunter Fulton brought out another caution and went to the pits ending his night on lap 13.

Hogue got a good run off turn 2 on the restart but it still wasn’t enough to get by Powell. Hogue got his nose under Powell with 5 laps to go down the backstretch and into turns 3 and 4 but Powell’s run off of turn 4 was solid and he was able to hold the lead.

Powell started to pull away from Hogue with two laps to go. Powell went on to win the race over Hogue, Berkheimer, Long and Wayne Dutterer.

This Saturday, July 11, Lincoln Speedway is back in action with John Gleim Excavating Night with 410 Sprints, 358 Sprint and Central . Racing starts at 7:30PM with pit gates opening at 5:00PM and grandstand gates opening at 5:30PM.

Lincoln Speedway Teams Up with Freedom Off-Road for $10,000 Outlaw Tune-up