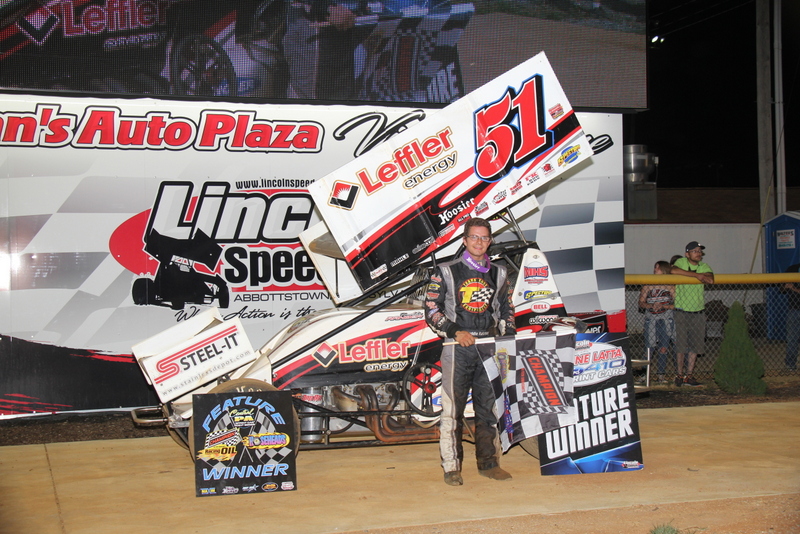 FREDDIE RAHMER CHARGES TO VICTORY; Ross Wires the Field in 358 Win; Workman’s Trip to Central PA Pays Off with Win

Abbottstown, PA (July 11, 2020) – Freddie Rahmer lined up ninth for the 30-lap feature on John Gleim Excavating Night. Rahmer reeled in early race leader, Billy Dietrich, in lapped traffic to take the lead and cruised to his third win at the track this year.

Dietrich started on the pole with Dylan Norris to his outside. Dietrich took the early race lead using the high line around the track. Norris also chose the high side while Tim Glatfelter went to the bottom to challenge Norris for second. Matt Campbell entered the mix and made it a three-way battle for second.

Norris continued to use the high line and pulled away from Glatfelter and Campbell. While Glatfelter and Campbell continued their battle for third Brian Monteith passed by both of them to advance from fifth to third in one turn. Freddie Rahmer followed and went to work on Montieth right away. Rahmer tried a slide job for third on lap 5 in turns 1 and 2 but Montieth held the spot.

Montieth tried a slide job of his own on lap 6 to take second from Norris in turns 1 and 2. Once again Rahmer followed as race leader, Dietrich entered lapped traffic on lap 6.

Rahmer got by Montieth for second on lap 8 and went to work on tracking down Dietrich in lapped traffic. Rahmer caught up with Dietrich on lap 9 and got by him for the lead with a slide job in turn 2.

Montieth battled Dietrich for second as they both used the high line around the track.

Rahmer continued to work through lapped traffic and had a 2.368 advantage over Montieth when the yellow came out on lap 14 for Bradley Howard. Howard came to a stop on the front stretch.

Freddie paced the field for the single file restart with Dietrich, Montieth, Campbell and Norris lined up behind him.

Monteith went to the bottom of the track on the restart to try and slide Dietrich for second but Dietrich maintained the position.

Rahmer was pulling away from the rest of the field while his brother, Brandon, was trying to make his way into the top 5.

Lapped traffic came into play on lap 18 for the leader as Montieth continued to work on Dietrich for the second spot.

Montieth slowed to a stop on the front stretch on lap 20 bringing out the caution. Montieth was running third when he stopped on the track.

Norris faded on the restart allowing Brandon to take the fourth spot.

Chase Dietz drove by both Glatfelter and Norris to put himself into the top 5 right before the red flag came out on lap 22. Norris got a piece of the outside wall in turn 2 while running sixth and took a wild ride.

Rahmer shot out to the lead on the restart while Brandon used the bottom in turns 1 and 2 to get by Campbell for third.

Campbell tried to return the favor and take third back, but Brandon blocked the low line keeping the position. Dietz went to work on Campbell for fourth as the laps wound down.

Freddie Rahmer got to the checkered flag 3.070 seconds ahead of Dietrich. Brandon Rahmer crossed the line third and Campbell was fourth. Dietz finished fifth to complete the top five.

Ross Wires the Field in 358 Win

Tyler Ross used the outside of turns 1 and 2 on the start to get by Chris Frank for second. Ross used his momentum down the backstretch and took the lead from pole-sitter, Zachary Allman coming out of turn 4.

Allman took the lead at the line when the green flag dropped with Frank running second. Ross drove the high side from his fifth place starting spot to lead lap 1. John Sharpe brought out the caution on the first lap when he came to a stop on the front stretch.

The field lined up single file behind Ross, Allman, Frank, Brett Strickler and Scott Fisher for the restart. Eric Parker brought out another caution on the restart when he came to a stop on the back stretch.

Ross drove to the bottom in turns 1 and 2 on the restart and shot out to a commanding lead. Strickler went to the top going into turn 3 and got by Frank and Fisher for third coming out of turn 4. Strickler then set his sight on Allman for second.

Doug Hammaker entered the top five on lap 4. Strickler once again used the top in turns 3 and 4 and got by Allman coming out of turn 4 to take second on lap 5.

Ross entered lapped traffic on lap 6 as Hammaker continued to work his way to the front of the field. Hammaker got by Fisher for third on lap 8.

The yellow flag flew on lap 8 for Brett Strickler, Hammaker and Hannah Riser who got together in turns 3 and 4. Strickler had been running second and Hammaker was third and they worked through lapped traffic.

Ross and Fisher pulled away from the field on the restart as Wanner used the high line around the track to get by Allman for third on lap 10.

Cody Fletcher drove under Frank for fifth coming out of turn 2 on lap 11.

Another caution came on lap 12 when Jacob Balliet got spun around in turn 2. Mark VanVorst headed to the pits under caution ending his night.

Fisher used the bottom line to try and reel in Ross. Wanner was running the top trying track down Fisher.

The red flag flew on lap 14 when Justin Foster flipped in turn 2 after making contact with the outside wall.

After restarting fourth Allman fell off the pace bringing out the yellow on lap 15.

The yellow flag flew again on the restart when Jordan Strickler came to a stop on the back stretch.

Wanner continued working the top to try and take second from Fisher but to no avail.

Ross got the win .836 seconds over Fisher. Wanner held on to third and Kody Hartlaub finished fourth. Fletcher completed the top five.

Workman’s Trip to Central PA Pays Off with Win

Billy Workman Jr. made the 7-hour trip from North Carolina to race at Lincoln on Saturday night. The long haul paid off in more ways than one for the driver as he won the feature and got laps in at the track that will host the US Legends Dirt Nationals in September.

Brent Marquis and Travis McClelland shared the front row for the 20-lap feature with Workman lined up third.

Marquis took the lead at the start by a nose over McClelland. The two raced side by side with McClelland leading lap 1 and Bill Diehl moving into second.

Scott Houdeshell and Workman battled door to door for third. Workman took the spot and got his nose under Diehl for second but couldn’t make the pass before the caution came out on lap 3 for debris in turn 4.

McClelland led Diehl, Workman, Houdeshell and Marquis to the cone for the single file restart.

Workman drove under McClelland going into turn 1 to take the lead. McClelland kept Workman close with Diehl right on his bumper.

Workman created some distance between McClelland, but Travis was not able to shake Diehl off his tail.

Jeremy Hahn fell off the pace going down the back stretch bringing out the caution on lap 10.

Chris Transeau and Jeremy Ott both restarted outside the top 5 and both wanted to get by Marquis and find themselves inside the top 5.

Both Transeau and Ott drove by Marquis on lap 12 sending Brent to seventh.

Diehl got a solid run off of turn 2 on lap 14 to get a nose under McClelland but couldn’t make the pass. The yellow flag flew again on lap 15 as Chuck Dell, Joe Ryan Osborne and Austin Bellamare got together in turn 4.

After restarting third Diehl still had his sight set on second but McClelland was focused on taking the top spot from Workman. McClelland got his nose under Workman with two laps to go but couldn’t get by the invader.

Workman got to the checkered flag ahead of McClelland. Diehl finished third and Houdeshell crossed the line fourth. Ott held on to finish fifth.

This Saturday, July 18, Lincoln Speedway is back in action with Pepsi Night. The 410 Sprints will compete for $10,000 in the Outlaw Tune-up presented by Freedom Off-Road. Super Sportsman (Touring Series) and Midgets will also be in action. Racing starts at 7:30PM with pit gates opening at 5:00PM and grandstand gates opening at 5:30PM.

Lincoln Speedway Teams Up with Freedom Off-Road for $10,000 Outlaw Tune-up