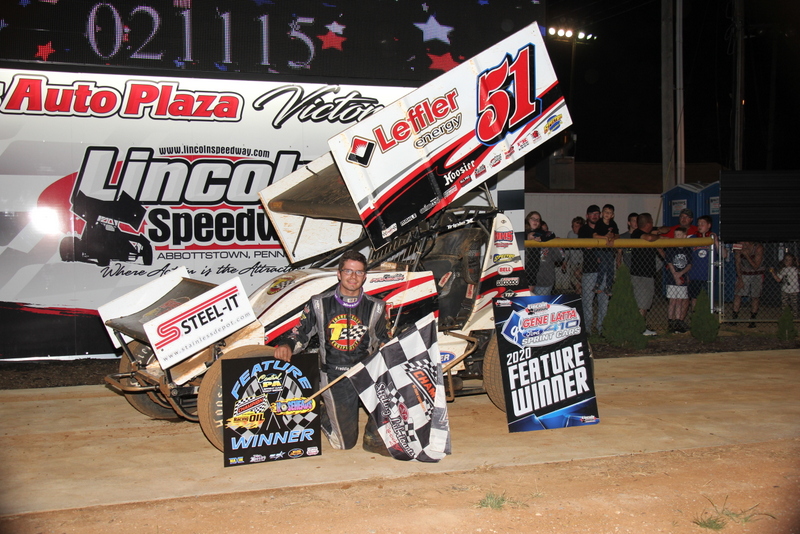 Abbottstown, PA (June 20, 2020) – Freddie Rahmer drove from his 13th starting spot to edge out the race’s hard charger, Brian Montieth, for his second win in as many weeks.

Two young guns shared the front row for the start of the 30-lap feature. Brent Shearer was on the pole with Aaron Bollinger to his outside.

Shearer was out to the lead when the green flag dropped with Bradley Howard battling Bollinger for second. Howard took the spot from Bollinger on the first lap.

Kyle Moody drove to fourth on the first lap from his seventh starting spot while Cale Thomas and Brett Michalski battled for fifth.

With drivers jostling for position behind him, Howard focused on reeling in Shearer for the lead.

The front of the field started to bunch up as they approached lapped traffic which led to some exciting racing.

Bollinger was able to track down Howard to challenge him for second but Howard still had his sight set on the lead. Howard tried a slide job on lap 12 for the top spot but Shearer took it back.

As Howard was fighting Shearer to take the lead from Shearer, Moody was driving door to door with Bollinger on lap 14 for third. Bollinger held the spot.

Howard’s hard work paid off and he drove to the lead on lap 15 with a slide job.

While Howard was reeling in Shearer, Freddie Rahmer was making his way through the field. Rahmer had driven to fifth on lap 16.

The yellow flag flew on lap 17 for Dylan Norris who stopped on the back stretch. Under the yellow Thomas headed to the pits with a front wing issue.

Shearer, Moody, Bollinger and Rahmer lined up behind Howard for the single file restart. Montieth lined up ninth for the restart after starting 23rd.

Shearer drove to the bottom of turn 1 to try and take the lead back from Howard, but Howard wasn’t giving it up.

Rahmer drove to third on the restart while Danny Dietrich was up to fifth from his 17th starting spot.

Dietrich was working the high line as he battled with Moody and Shearer for fourth.

Rahmer pulled a slide job on Howard on lap 22 in turns 1 and 2 for the lead.

Moody followed on next lap and tried sliding Howard for second but couldn’t make it stick.

Rahmer was working his way through lapped traffic while a three car battle for second ensued behind him. Montieth took the spot with a slider on lap 26 in turns 1 and 2.

Montieth caught Rahmer at the flag stand with one lap to go but the move ended up costing him as Rahmer was able to create some distance.

Rahmer beat Montieth to the checkered flag by .334 seconds for his second win in a row. Montieth’s impressive drive from 23rd to second earned him the hard charger honors for the race. Dietrich finished third. Howard held on to finish fourth and Moody crossed the line fifth.

With his win on Saturday night Alan Sagi has now won in five different decades.

Sagi lined up third for the 20-lap feature behind Doug Weisser and Chad Earnst.

Earnst drove to the lead when the green flag waved. Weisser got to the inside of Earnst in turn 4 to challenge him for the lead but Chad held the position.

The first caution of the race came on lap 1 for Kyle Moser.

Earnst held onto the lead on the restart ahead of Weisser, Sagi, Kurt Zimmerman and DJ Mease.

Mease got under Zimmerman to try and take the fourth spot, but Kurt held the position.

The yellow flag flew again on lap 5. Jed Latshaw was off the pace and tried to exit the track in turn 2 but did not have enough momentum to make it to the pits.

After the caution came out Weisser, who was running second, spun out resulting in a restart from the rear of the field.

Earnst led Sagi, Zimmerman, Mease and Tommy Slanker to the cone for the single file restart.

A battle for the race lead between Earnst and Sagi was just getting underway when the caution came out on lap 8.

Travis Mease, who started 20th, was up to seventh for the restart. Sagi, Zimmerman, Slanker and Craig Wagaman lined up behind Earnst for the second restart of the race.

Slanker was working on the inside of Zimmerman for third and took the spot on lap 11. After making the pass Slanker slid up the track into the wall in turn 1 to bring out the caution.

Travis Mease was running the outside and got by Wagaman to get in to the top five.

Sagi drove under Earnst for the lead coming out of turn 4 but the caution came out before they crossed the start-finish line. The yellow came out on lap 12 for Daniel Garrett who slowed in turn 2.

Travis Mease was driving alongside his brother DJ for the fourth spot. DJ held him off but Wagaman joined the battle and got to the inside of Travis to take fifth.

Sagi got the lead on lap 14 and started to pull away from Earnst.

Wagaman reeled in Earnst and was all over him for second but was not able to make the pass allowing Earnst to pull away.

Sagi crossed the line 2.259 seconds ahead of Earnst for the win. Wagaman finished third. Zimmerman was fourth and DJ Mease held on to finish fifth.

Heat winners for the Limited Late Models were Craig Wagaman and CJ Mease.

Will Walls Wins in Photo Finish

After plenty of side by side racing throughout the 20-lap feature it was only fitting that two drivers were neck and neck at the finish.

Pole-sitter, Eric Tripp took the lead at the start with Ryan Smith getting under Bud Witmer for second. Brian Walls got upside on the back stretch bringing out the red flag before a lap could be completed. Chris Heller was also involved in the incident and was able to rejoin the field.

Tripp raced to the lead on the complete restart with Smith getting under Witmer for second and Greg Diehl following to take third at the line.

Smith drove to the inside of Tripp for the lead and took it coming out of turn 4 on lap 2. Diehl once again followed and got by Tripp on the inside of turn 3 to take second on lap 3.

The caution came out on lap 3 for Dan Hoffman who got turned around in turn 2.

Smith led Diehl, Jasen Geesaman, Tripp and Will Walls to the cone for the single file restart.

Smith led on the restart with Diehl on his bumper. Diehl got to the outside of Smith in turns 1 and 2 but Smith held the position. Smith and Diehl were driving door to door down the back stretch for the lead with Smith beating Diehl back to the line to maintain the lead.

The yellow flag flew again on lap 6 for Zach Myers who got into the inside wall coming out of turn 4.

Once again the leaders were racing side by side with Smith having the advantage over Diehl at the line every time they completed a circuit.

Right behind the leaders there was another side by side race for third between Geesaman and Walls.

With two side by side battles in the top four you could throw a blanket over them as they battled for position.

Smith was holding onto the race lead by inches when Walls got by Geesaman for third lap 13.

After the pass for third Smith got a slight advantage over Diehl and was able to pull away.

Walls looked to the inside of Diehl for second on lap 15 before the caution came out for Dan Hoffman who gets out of sorts in turns 3 and 4.

Smith led Diehl, Walls, Geesaman and Tripp on the restart.

Diehl drove to the top again trying to get the lead leaving the bottom open for Walls to make a move on the inside. Diehl held on to second by inches over Walls at the line on lap 16.

Diehl got high in turns 3 and 4 on lap 17 giving Walls the opening he needed to move into the second spot.

Walls looked to the inside of Smith on the last lap and the two raced side by side to the checkered flag. In the photo finish, Walls beat Smith to the line by mere inches. Diehl crossed the line third. Geesaman finished fourth and Michelle Walls completed the top five.

Next Saturday, June 27, Lincoln Speedway is back in action with Night #2 of Pennsylvania Sprint Speedweek presented by Red Robin. The 410 Sprints will compete in the $9,200 to win Kevin Gobrecht Memorial. The Central PA Legends will also be in action. Racing starts at 7:30PM with pit gates opening at 5:00PM and grandstand gates opening at 5:30PM.