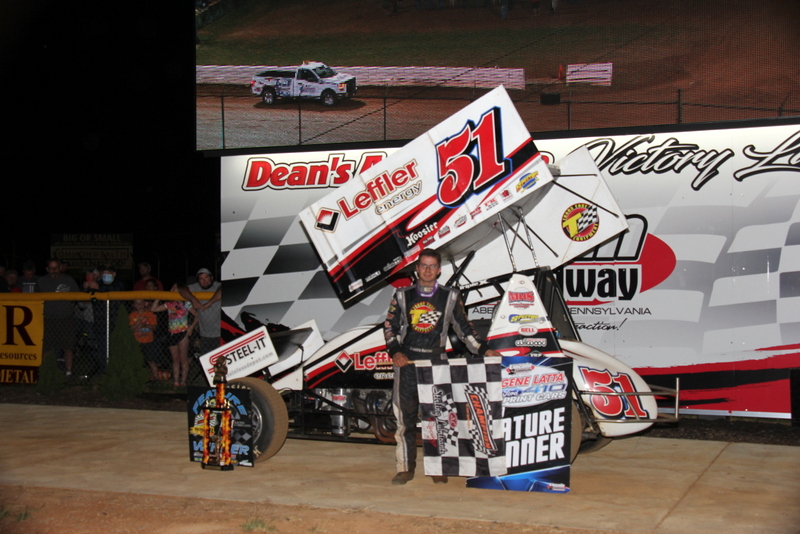 Abbottstown, PA (June 13, 2020) – Freddie Rahmer led the 33-lap feature wire to wire for his first win of the season at Lincoln Speedway. The $5,000 victory came on the 9th Annual Fallen Firefighters Night in Memory of Brandon Little.

Qualifying for the feature event on Saturday night consisted of two sets of heat races for the 410 sprints. The initial heat line up was determined by pill draw with the second heat lining up as an invert of the initial start. Passing points were awarded for each heat with the top six drivers in the point standings redrawing for their feature starting spot. Drivers earned points for passing and lost points for falling back through the field.

The 24-car field saluted the fans by going four-wide before the start of the 33-lap feature.

Rahmer drew the pole in the redraw and had Tim Wagaman lined up to his outside and Chase Dietz and Brian Montieth behind him.

Freddie shot out to the lead with Wagaman holding on to second while Dietz and Montieth battled for third behind him.

While running second Wagaman fell off the pace on lap 6. Tim came to a stop on the front stretch bringing out the first caution of the race. Wagaman utilized the two minute work period and attempted to rejoin the field, but he pulled back into the pits before the restart.

Rahmer was getting ready to enter lapped traffic when the caution came out. Freddie led Montieth, Dietz, Trey Hivner and Tim Glatfelter for the single file restart.

The top line around the track was where Rahmer and Montieth were finding their speed at the front of the field. Dietz, running third, gave the bottom of the track a try but joined the leaders on the top after not making any headway.

Rahmer caught the tail end of the field on lap 12 with Montieth closing in.

Freddie created some distance between Montieth as he maneuvered through lapped traffic. As the leaders worked their way through the field Dietz remained within striking distance of the top two. Dietz was reeling in Montieth when on lap 16 Dietz did a 360 spin in turn 4. Chase maintained his third place spot, but lost ground on Montieth.

Rahmer’s lead was over 4 seconds with 10 laps to go.

After his mishap Dietz was able to hunt down Montieth again to challenge him for the second spot.

The red flag came out on lap 28 for Billy Dietrich who broke an axle and took a tumble in turn 3. Bradley Howard & Tony Fiore went to the pits ending their nights while the red flag was out.

Troy Wagaman Jr. had a left front tire going flat when the red flag came out. Wagaman’s team changed the tire in the pits and he was able to rejoin the field. Wagaman had been running 10th and restarted 11th.

The red flag erased Rahmer’s 5.243 second lead over Montieth. Montieth, Dietz, Glatfelter and Ryan Smith lined up behind Rahmer for the restart.

Both Rahmer and Monteith went to the top with Dietz trying out the bottom again. Dietz got a good run off of turn 2 but it still wasn’t enough to take second from Montieth.

Smith continued his charge through the field and took fourth from Glatfelter on lap 29.

Krimes was right there to challenge Glatfelter for fifth and took the spot at the line with two laps to go.

Rahmer took the checkered flag 1.599 seconds ahead of Montieth. Dietz held onto third. Smith, the hard charger, finished fourth from his fifteenth starting spot and Krimes crossed the line fifth.

The first set of heat winners for the 410 sprints Chase Dietz, Glenndon Forsythe and Tim Wagaman. After the line ups were inverted the second set of heat were won by Chad Trout, Freddie Rahmer and Brian Montieth.

Fisher Holds Off Hammaker for 358 Victory

Scott Fisher pulled double duty on Saturday night running in both the 410 and 358 sprint divisions. With the double heat format and running both the B-main and feature in his 410, Fisher had already driven 72 laps before hitting the track for the 358 20-lap feature (Fisher finished the 410 feature one lap down).

Fisher lined up on the outside of pole-sitter, Brett Strickler. Todd Rittenhouse Jr. who won the first two features of the season lined up sixth.

The 358 drivers saluted the fans and honored the memory of Brandon Little by going four-wide before the feature.

Strickler took the lead when the green flag dropped but the yellow came out before a lap was in the books. Jacob Balliet came to a stop in turn 4 and headed to the pits ending his night.

The field lined up behind Strickler and Fisher for a complete restart.

This time Fisher shot out to the lead with Strickler running second and Rittenhouse in third.

Fisher and Strickler were running the bottom line while Rittenhouse was working the top as he challenged Strickler for second. Rittenhouse took second from Strickler at the line on lap 2. Doug Hammaker followed and took third on lap 3.

The caution flag flew on lap 3 for Steve Owings and Kenny Kuhn who got together in turns 3 and 4. Owings rejoined the field.

Fisher led Rittenhouse, Hammaker, Strickler and Matt Findley to the cone for the single file restart.

Fisher drove to the bottom on the restart with Rittenhouse and Hammaker on his tail. Rittenhouse was running the outside while Hammaker ran the bottom as they battled for second.

Hammaker tried a slide job on Rittenhouse in turn 4 and took second on lap 4.

Fisher had a .951 second lead at the half way point as he caught the tail end of the field.

Hammaker closed the gap and caught Fisher as he worked through lapped traffic. Fisher slammed the door in turn 4 as Hammaker tried to make the pass for the lead on the bottom.

The yellow flag flew again on lap 13. This time it was for Billy Heltzel as he stopped on the front stretch with fuel leaking inside the car. Heltzel headed to the pits ending his night.

Hammaker, Rittenhouse, Strickler and Findley lined up behind Fisher for the restart.

Fisher got to the bottom of turn 1 with Hammaker on his outside challenging for the lead. Fisher got a smooth run off of turn 2 allowing him to hold onto the top spot.

Hammaker moved to the bottom and watched Fisher pull away. With four laps to go the field reset after another caution. Jordan Strickler got spun around in turns 3 and 4.

Once again Fisher followed the bottom line through turns 1 and 2 with Hammaker looking to the outside. Fisher held on to the lead and beat Hammaker to the checkered flag by .977 seconds. Rittenhouse crossed the line third. Brett Strickler finished fourth and Cody Fletcher completed the top five.