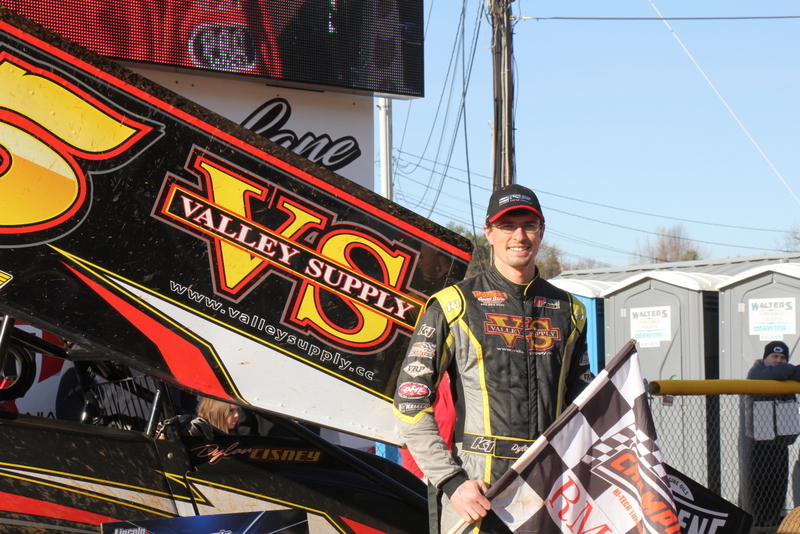 Abbottstown, PA (March 1, 2020) – Dylan Cisney’s first career Lincoln Speedway win was not as easy as it may appear on paper. Cisney started on the pole of the 25-lap feature, but it wasn’t smooth sailing to land in victory lane.

Cisney took the lead at the drop of the green flag, with defending track champion, Brian Montieth moving up to third from his fifth starting spot coming out of turn 2 on the first lap. Montieth was up to second on the next lap and got around Cisney using the middle of turns 1 and 2 for the lead but the caution would come out before Montieth’s lead was official. Chase Dietz got spun around at the end of the front stretch and was able to rejoin the field.

Dylan led Montieth, Gerard McIntyre, Brandon Rahmer and Glenndon Forsythe to the cone for the race’s only restart.

Montieth went to the bottom of turn 1 and got by Cisney for the top spot. Cisney and Montieth raced wheel to wheel down the backstretch with Cisney gaining the advantage into turn 3. Montieth went low again into the turns and had the lead coming out of turn 4.

Lap 13 saw trouble for the leader as he worked through heavy lapped traffic. Montieth did a 360 spin coming out of turn 2 and dropped back to sixth. The car never stopped so the caution did not come out. Montieth’s misfortune moved Cisney into the lead with McIntyre running second and Brandon Rahmer in third.

Montieth tried to get by McIntyre in turns 1 and 2 with three laps to go and this time he was able to complete the pass. McIntyre lost third to Dietrich as he had to check up due to Montieth’s pass.

Dietrich got under Montieth in turns 3 and 4 to take second with two laps to go. Despite the back and forth, Dietrich and Montieth were closing in on the leader but did not have enough laps to make a run for the lead.

Cisney made it to the checkered flag .240 seconds ahead of Dietrich for his first career Lincoln Speedway victory. Dietrich nosed out second place over Montieth by less than a tenth of a second. Brock Zearfoss finished fourth from his thirteenth starting spot earning the hard charger award. McIntyre held on for a fifth place finish.

Also, of note was a visit from Plainfield, Indiana native, Zach Hampton. Hampton made the nine hour trip to the pigeon hills and finished tenth in his heat and eleventh in the B-main. It was Hampton’s first trip to Pennsylvania to race.

Next Saturday, March 7, Lincoln Speedway is back in action with 410 Sprint Cars and open practice for all divisions racing at the track this season. Racing starts at 2PM with pit gates opening at 11:30AM and grandstand gates opening at noon.