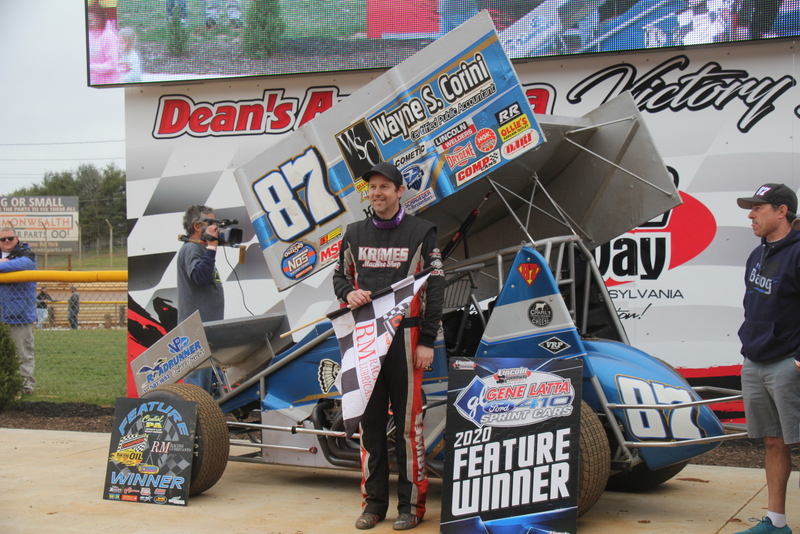 Abbottstown, PA (March 14, 2020) – It seemed that the lead was not a position one wanted to be in as two leaders experienced issues that took them out of the top spot during the first 20 laps of the race. Alan Krimes broke the mold and inherited the lead with five laps remaining and held on to win his first race of the season.

After a rough few weeks to start the season, Indiana native Cale Thomas won his heat race and started on the pole of the 25-lap feature. Scott Fisher shared the front row with Thomas as Dylan Norris and Jim Siegel made up the second row.

Thomas took the lead when the green flag dropped with Fisher settling into second and Norris and Siegel running third and fourth.

Thomas was running the top line around the track as Norris challenged Fisher on the bottom. Norris got by Fisher for second on the bottom of turns of 3 and 4 on lap 1 to take the spot.

Fisher got Norris back using the middle of turns 1 and 2 on the next lap. Siegel got by both Fisher and Norris to charge up to second coming out of turn 4 lap 2.

Ryan Smith was making his way up through the field from his sixth starting spot and was running fourth by lap 3 and made it up to third on lap 4.

Brian Montieth was on the move as well having made his way to the fourth spot on lap 6 from his eighth starting position.

Siegel was reeling Thomas in as they caught the tail end of the field when the red flag flew on lap 8 for Dylan Norris who ended up on his side in turn 3.

The leader Thomas hit the outside wall avoiding the overturned car of Norris damaging his right rear. Thomas headed to the pits and was able to rejoin the field, albeit at the tail end instead of the front.

After inheriting the lead after Thomas’ misfortune, Siegel led Smith, Montieth, Freddie Rahmer and Krimes to the cone for the restart.

Siegel drove to the top of the track and Smith went to the bottom entering turn 1. Siegel stuck to the top line with Smith joining him. Once Smith made the move up the track, Siegel started pulling away.

As Smith worked on reeling in Siegel Freddie Rahmer and Alan Krimes both got by Montieth on lap 10 to take third and fourth sending Montieth back to fifth.

Freddie went to work on Smith for second, but Smith had his sight set on Siegel. Smith got a good run off of turn 2 forcing Siegel to the bottom of the track going into turns 3 and 4 but Siegel was able to hold off Smith’s charge

Krimes got by Freddie Rahmer for third on lap 17 just as the leaders were catching the tailed end of the field.

Siegel and Smith crossed the line wheel to wheel as they both tried to get through lapped traffic. Smith took the lead going down the backstretch lap 19. Krimes followed and took second from Siegel on the following lap.

Smith slid up the track on the backstretch and thought he had cleared the lapped car of Thomas, but he was mistaken. The yellow flag came out with five laps to go as Smith came to a stop ending his afternoon. Thomas had some minor front end damage and was able to stay out on the track.

Krimes inherited the lead with Siegel, Freddie Rahmer, Montieth and Brandon Rahmer lined up behind him for the restart.

On the restart Krimes went to the bottom into 1 with Siegel driving through the middle. Krimes held the lead.

Brandon took fourth from Montieth coming out of turn 2 on lap 21. Freddie challenged Siegel for second with two laps to go but Siegel was able to hold him off.

Krimes crossed the finish line 2.277 seconds ahead of Siegel. Freddie Rahmer finished third and for the second weekend in a row the Rahmer brothers finished back-to-back, as Brandon crossed the line fourth. Montieth completed the top five.

After a successful 2019 season at the track, Jeremy Ott started on the pole to kick-off the 2020 season. Stephen Wurtzer lined up second with Zachary Settle and Alex Robinson in row two.

Ott got out to the lead at the start with Settle running second and Wurtzer in third. Bill Diehl got by Wurtzer to take the third spot before a lap was completed.

Ott, Diehl and Settle crossed the start finish line three wide for the lead with Settle taking the top spot by a nose. Ott took over the lead coming out of turn 2 with Diehl moving up to second sending Settle to third.

Diehl drove by Ott for the lead and Travis Perry got by Osborne for third.

The first three laps of the race saw three different leaders. Before the opportunity for four laps and four leaders could occur, the caution came out. Ott and Perry got together in turns 3 and 4 as they ran second and third. Both drivers rejoined the field.

Diehl led Osborne, Settle, Robinson and Wurtzer to the cone for the single file restart.

Osborne was all over Diehl for the lead on the restart as Ott and Perry started to work their way through the field.

The caution flag flew again on lap 4. This time it was for Aaron Updegraff who got spun around in turn 4.

Osborne was all over Diehl again on the restart and got a nose under the leader going into turn 3. Diehl held off Osborne as Robinson moved into the third position.

Brian Racine was on the move making his way up to fourth from his ninth starting spot on lap 6.

Osborne was still working on Diehl for the lead as they broke away from the rest of the field.

Racine had made his way up to third on lap 7 when the caution came out. Chris McKinney and Jorjie Sweger were both backed into the guardrail in turns 3 and 4.

Osborne tried to go low to get by Diehl, but Diehl blocked his line. After falling back to fourth Racine was back up to third.

Osborne got his nose under Diehl at the line as the field hit the halfway point of the race.

Once again Osborne looked to the inside of Diehl and took the lead going into turn 3 on lap 11.

Racine battled Diehl for second and took the spot with five laps to go.

The yellow flag flew on lap 16 for Seth Kearchner as he did a couple of 360 spins and kept moving.

Osborne pulled away from the field on the restart and got the checkered flag 1.275 seconds ahead of Racine. Diehl held on to third and Settle crossed the line fourth. Chris Transeau drove from his twelfth started spot to a fifth place finish.

Osborne has only run his Legend car on dirt four times including Lincoln on Saturday. It was his first trip to the 3/8th mile oval.