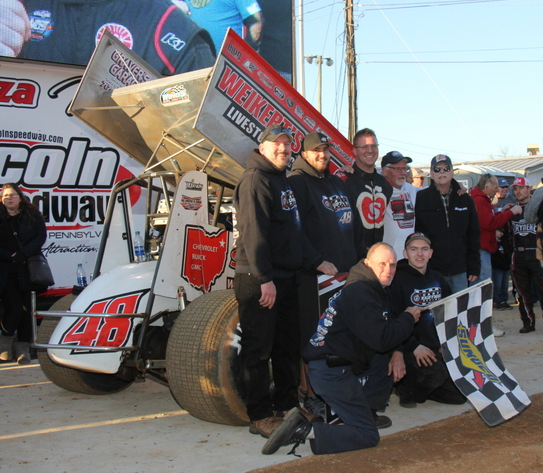 Abbottstown, PA (February 22, 2020) – Danny Dietrich took advantage of a miscue by Ryan Smith to take the lead just before the halfway point of the 30-lap Ice Breaker, to claim his second career opening day win at Lincoln.

Dietrich lined up for the main event third, behind pole-sitter Glenndon Forsythe and Smith. Forsythe led the field into turn 1 but the caution came out before a lap could be completed. Brett Michalski and Landon Myers got tangled up in turn 1. Both drivers were able to rejoin the field, albeit Michalski without a front wing.

Forsythe took the lead on the restart, but Smith took over the top spot coming out of turn 2.

Myers brought out the second caution of the race on lap 1 after some contact with Jacob Allen. Myers and Allen both headed for the pits and were unable to rejoin the field for the restart.

Smith led Forsythe, Dietrich, Logan Schuchart and Kyle Moody to the cone for the first single file restart of the season.

Ryan held onto the lead with Dietrich working on Forsythe for the second spot.

Freddie Rahmer was making his way through the field from his eighth starting spot as Dietrich got by Forsythe for second on lap 4. The yellow flag waved again on lap 4. This time it was for Chase Dietz who was turned around in turn 4.

Dietz rejoined the field as Smith led Dietrich, Forsythe, Schuchart and Brandon Rahmer on the restart.

Schuchart got by Forsythe for third and Freddie Rahmer continued his march to the front getting by his brother, Brandon, for fourth. Defending track champion, Brian Montieth, made his way up to fifth from his fifteenth starting spot before the caution came out on lap 7. The fourth caution of the race was for Adam Wilt and Dylan Norris who got together in turns 3 and 4. Both drivers rejoined the field and Michalski was able to get a front wing put back on under caution.

The top five for the restart were Smith, Dietrich, Schuchart, Freddie Rahmer and Montieth.

Dietrich got his nose under Smith coming out of turn 4, but Smith held him off.

Freddie Rahmer was going after Schuchart for third, but Logan held the spot.

Lap 9 saw another caution. Michalski came to a stop in turn 1. Officials called for an open red for teams to add fuel to the cars.

Smith got a good jump on the start, but Dietrich caught him on the back stretch. Smith held him off again with Dietrich staying close. Smith hit the wall coming out of turn 2 and that was enough of an opening for Dietrich to take the lead on lap 12.

Montieth brought out the sixth caution of the race when he came to a stop in turn 4, ending his afternoon.

Dietrich led Smith, Schuchart, Freddie Rahmer and Brandon Rahmer to the cone for the restart. Dietrich went to the bottom of the track going into turn 1 with Smith trying a higher line. Dietrich held off Smith while Freddie battled Schuchart for third.

Smith got sideways going into turn 1 on lap 15 bringing out the yellow flag once again. Chad Trout also had issues in turn 1 and also came a stop.

With the second place car out of the running, the top five for the restart were Dietrich, Schuchart, Freddie Rahmer, Brandon Rahmer and Brock Zearfoss.

Freddie drove through the middle of turns 1 and 2 to take second from Schuchart, but Logan got him back on the next lap.

Pole-sitter, Forsythe got by Zearfoss to take fifth. Zearfoss stayed within striking distance and took the spot back on lap 20 before the eighth caution of the race. Alan Krimes got turned around in turn 4. He was able to rejoin the field.

Dietrich got a good jump on Schuchart and Freddie on the restart. The ninth and final caution of the race, which in some aspects felt like a marathon, came on lap 22 for fifth place running Zearfoss. He came to a stop in turn 4 ending his afternoon.

With eight laps to go the field lined up once again behind Dietrich for the restart. Dietrich and the rest of the top five, Schuchart, Freddie Rahmer, Brandon Rahmer and Anthony Macri, started to pull away from the rest of the field.

Dietrich was just catching the tail end of the field when the white flag waved. Lapped traffic did not come into play and Dietrich took the checkered flag and crossed the line 1.145 seconds ahead of Schuchart. Freddie Rahmer held onto third and Brandon Rahmer finished fourth. Macri crossed the line fifth after starting tenth in the main event.