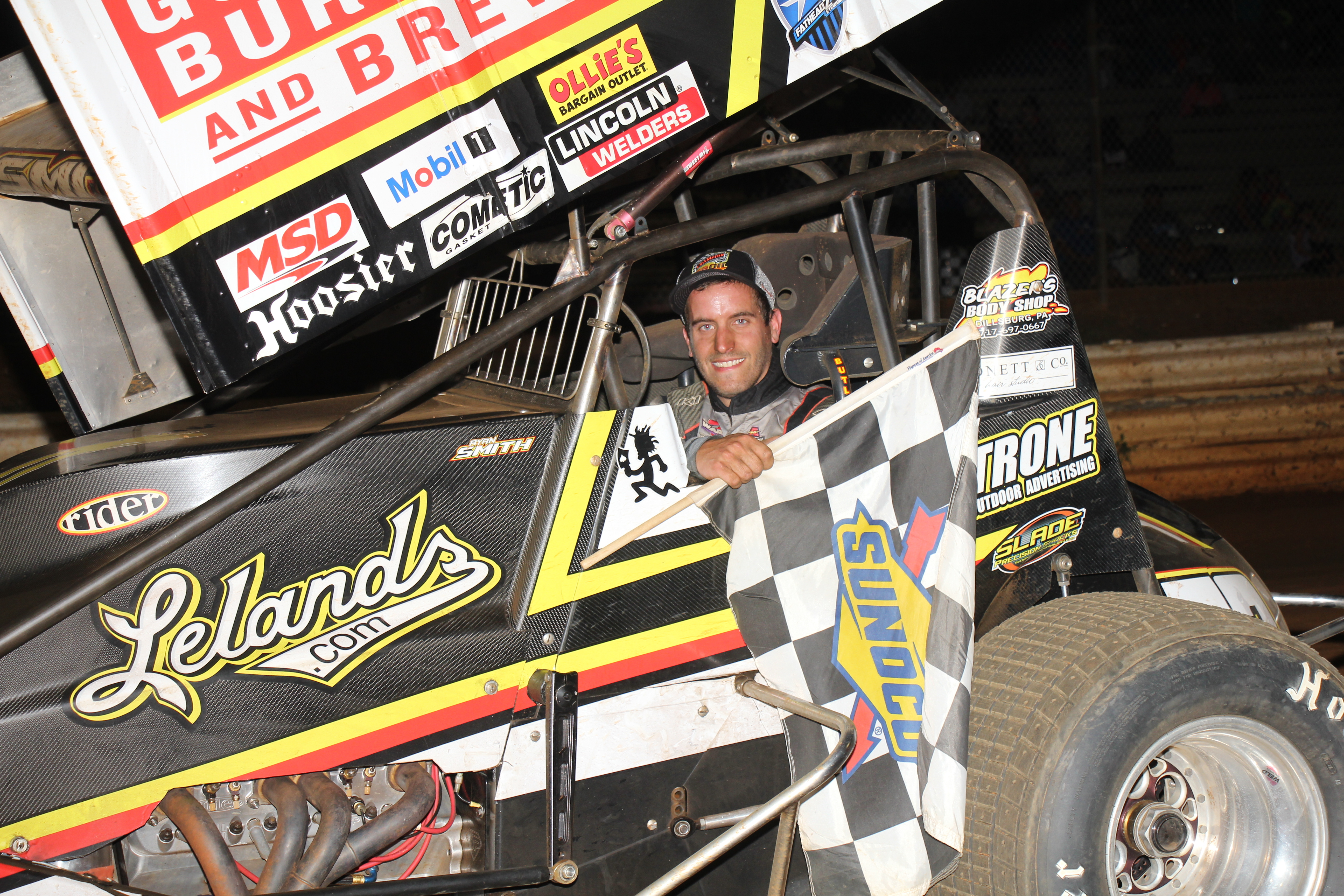 Abbottstown, PA (September 28, 2019) – Ryan Smith had yet to find victory lane in 2019, but that changed when the Kunkletown driver earned his first career win at the Fabulous Lincoln Speedway on Saturday night. Smith held off a charging Danny Dietrich to win the 25-lap main event.

Walton got by Montieth for third at the start of the race as Smith led Dietrich around the 3/8th mile oval.

It didn’t take Montieth long to start challenging Walton for third. Montieth took the spot back on lap 3 after getting under Walton going into the third turn.

The first caution of the race came on lap 4 for Freddie Rahmer who was parked sideways in turn 4.

Smith, Dietrich, Montieth, Walton and Anthony Macri were the top five heading into the restart.

Smith got a great start and went high going into turn 1 with Dietrich opting for the bottom of the track.

Macri used the bottom of the track to challenge Walton for fourth and took the spot-on lap 6.

The yellow flag flew again on lap 7. Anthony Fiore and Brett Michalski got turned around in turn 4. It was a close call for Smith and Dietrich as they nearly get together avoiding the spun-out cars.

Dietrich went low again into turn 1 on the restart and once again Smith held him off.

Dietrich was searching for something on the bottom of turns 1 and 2 as he tried to reel in Smith.

As Dietrich was rim ridding in turns 3 and 4, he hit the wall on lap 16 and lost nearly a second to Smith but was able to keep running.

Another yellow flag came out on lap 18 when Chris Arnold ended up facing the wrong was in turn 4.

On the restart Dietrich once again went low and this time he stayed within striking distance of Smith. Dietrich slid Smith in turns 3 and 4 for the lead, but Smith beat him back to the line.

Dietrich tried another slide job in turns 3 and 4 as the white flag waved for the leaders but once again Smith was able to hold him off.

Smith beat Dietrich to the checkered flag for his first 410 win of the season by .952 seconds. Montieth crossed the line third. Macri was fourth and Chad Trout completed the top five.

Jon Stewart parked his number 13 machine in victory lane for the first time in his career on Saturday night after making the pass for the lead with seven laps to go.

Fletcher took the lead going into turn 1 but the yellow came out before the first lap was completed. The caution was for VanVorst who ended up against the wall in turns 1 and 2.

Rohrbaugh and Stewart raced wheel to wheel for second with Rohrbaugh taking the spot as the caution came out on lap 5 for Dylan Orwig and David Holbrook. Orwig was spun around and Holbrook came to a stop in turn 4.

Fletcher led Rohrbaugh, Stewart, CJ Tracy and Hamer to the cone for the restart.

Hammaker was trying to work his way into the top five as Stewart got back around Rohrbaugh coming out of turn 2 on lap 7 for second.

An exciting three car race for the lead was brewing between Fletcher Stewart and Rohrbaugh. Fletcher was running the bottom as Stewart rolled through the middle of turns 1 and 2 and was rubbing the wall in turns 3 and 4.

Another yellow flag on lap 10 for Orwig set up the field for another restart.

Fletcher got a good jump at the cone and had a good run coming off turn 2.

The caution flag flew again on lap 12. Nat Tuckey, Brian Allman, Alyson Dietz and VanVorst piled up in turns 1 and 2.

With eight laps to go, Fletcher got out to the lead with another good restart.

Stewart caught Fletcher and the two raced wheel to wheel to the line on lap 14 with Stewart edging out Fletcher for the lead by .008 seconds.

Fletcher had taken the lead back, but the caution came out on lap 14 for Orwig who had spun out in turn 2.

Stewart was pulling away from Fletcher coming out of turn 2 but Fletcher made up ground in turns 3 and 4 running the bottom.

Troy Wagaman had worked his way up through the field to fourth from his ninth starting spot on with three laps to go after getting around Tracy.

Stewart crossed the line for his first career win at Lincoln .825 seconds ahead of Fletcher. Rohrbaugh finished third. Wagaman was fourth and Doug Hammaker completed the top five.

Lincoln Speedway will be back in action on Saturday, February 22, 2020 at 2PM for the Ice Breaker. Pit gates will open at 11:30AM and the grandstand will open at noon.