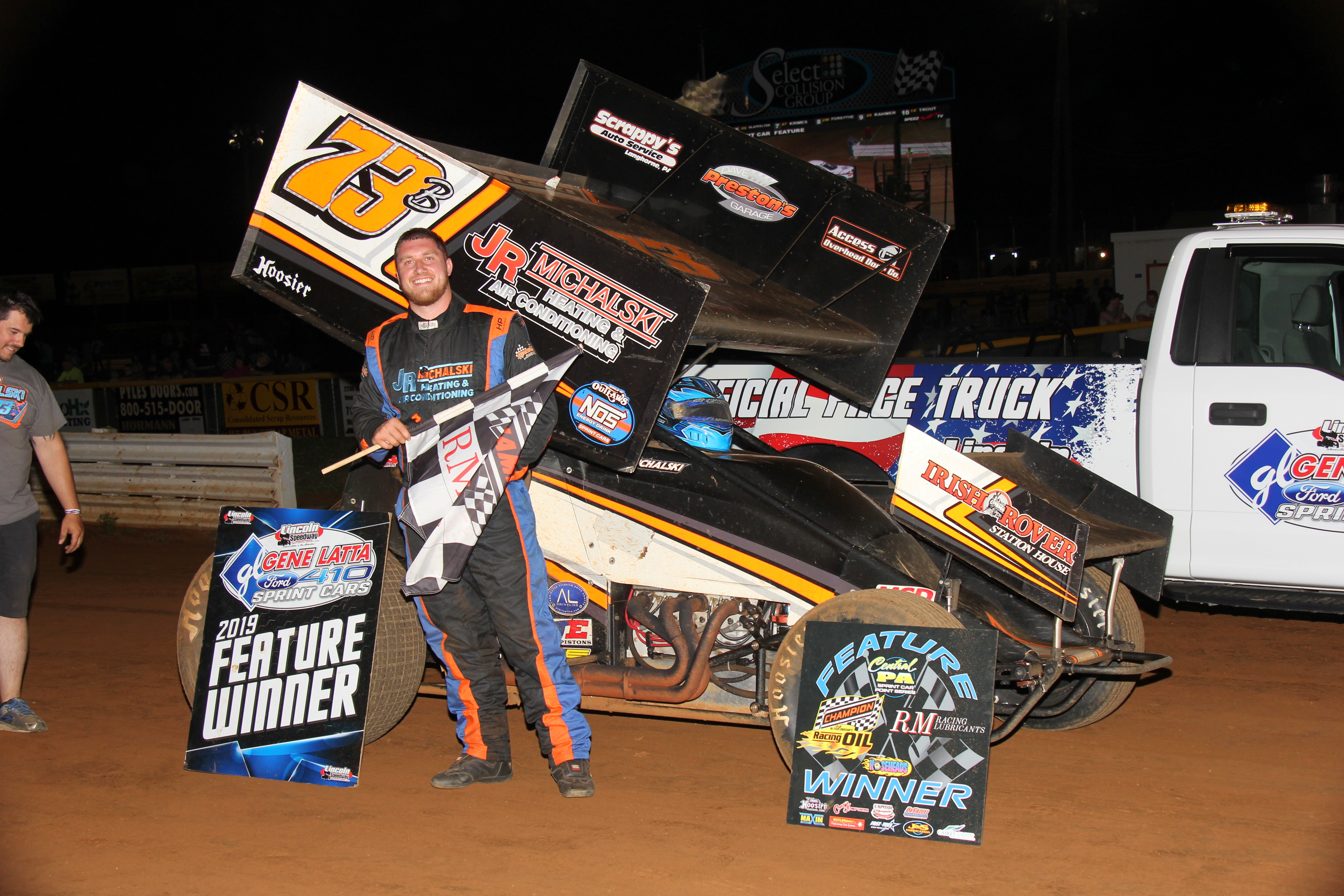 Abbottstown, PA (June 8, 2019) – They say the first win is always the hardest. Coming off his rookie of the year campaign, Brett Michalski won his first feature in the 410 division on Saturday night at Lincoln Speedway. After Michalski found success in the 360 division, he made the jump to 410 sprints full time in 2018.

Michalski started on the pole of the 25-lap feature with Kyle Moody on the outside of the front row. Moody was back at Lincoln after missing two weeks of racing.

Michalski got a good start at the line with Tim Wagaman getting by both Cole Young and Trey Hivner for third. Wagaman tried to get under Moody for second but couldn’t make it stick. Freddie Rahmer also had a solid start getting around three cars to advance to fourth on the first lap.

As Michalski and Moody both ran the top line around the track Moody started to reel Michalski in. The leaders hit lapped traffic on lap 6. Moody was forced to the bottom to get by lapped traffic which allowed Michalski to pull away.

The yellow flag came out on lap 15 for Trey Hivner who came to a stop in the top of turn 4.

Michalski led Moody, Wagaman, Rahmer and Jim Siegel to the cone for the single file restart.

Rahmer got under Wagaman for third as Michalski held onto the lead. As Michalski and Moody ran the top again, Rahmer was trying the bottom in turns 1 and 2. Rahmer reeled Moody in and slid up in front of him in turns 3 and 4 on lap 21 for second.

After taking second, Rahmer went to work on Michalski for the lead. The leaders were catching the tail end of the field as the white flag flew. Rahmer had one more shot for the win and took the chance with a slide job in 3 and 4 on the last lap but Michalski came back and beat him to the checkered flag by .263 seconds.

Last year Jeff Halligan became the first driver to win the 358/360 Challenge with a 358 car. This year he made it two wins in a row as the URC Sprints invaded Lincoln Speedway on Saturday night.

Chad Layton started on the pole of the 25-lap feature with Halligan lined up fourth behind Ryan Stillwagon and Josh Weller.

Layton went to the top of the track on the start and held onto the lead. Weller got by Stillwagon for second before the red flag came out on lap 1 for Connor Leffler and Jonathan Stewart in turns 3 and 4.

Following URC rules, the field lined up for a double-file restart with Layton opting to start on the bottom. Layton held off Weller on the restart with Dylan Norris getting up to third.

The red flag came out again on lap 5 for Wyatt Hinkle who ended up on his side in turn 4.

Layton chose the bottom again for the restart. Once again Layton held on Weller as the green flag dropped. Halligan and Norris were battling for third behind the leaders with Curt Michael making his way through the field into the top five.

Weller got under Layton in turns 1 and 2 to try and take the lead on lap 12. The red flag came out just as the race for the lead was heating up. The red came out for Austin Bishop in turns 3 and 4.

Once again Layton chose the bottom for the restart. Halligan got by Weller for second with Michael moving up to fourth.

Michael got by Weller for third on the backstretch on lap 13.

Halligan was all over Layton challenging him for the lead with 10 laps to go. Halligan was running the top and raced Layton wheel to wheel on lap 17. Layton held onto the lead, so Halligan tried the bottom still running wheel to wheel with Layton. Layton got a solid run coming out of turn 4 which allowed him to pull away from Halligan.

Halligan reeled Layton in again and got under him coming out of turn 2 on lap 20 for the lead.

Halligan beat Layton to the checkered flag by 1.203 seconds. Michael held onto third. Weller finished fourth and Dylan Norris, another 358 driver, rounded out the top five.

Both Freddie Rahmer and Scott Fisher pulled double-duty running in both divisions.

This Saturday, June 15, Lincoln Speedway is back in action with the 410 Sprints, 358 Sprints (Regular Show + May 25 make-up feature) & PennMar Modifieds. Racing starts at 7:30PM with pit gates opening at 5:00PM and grandstand gates opening at 5:30PM.