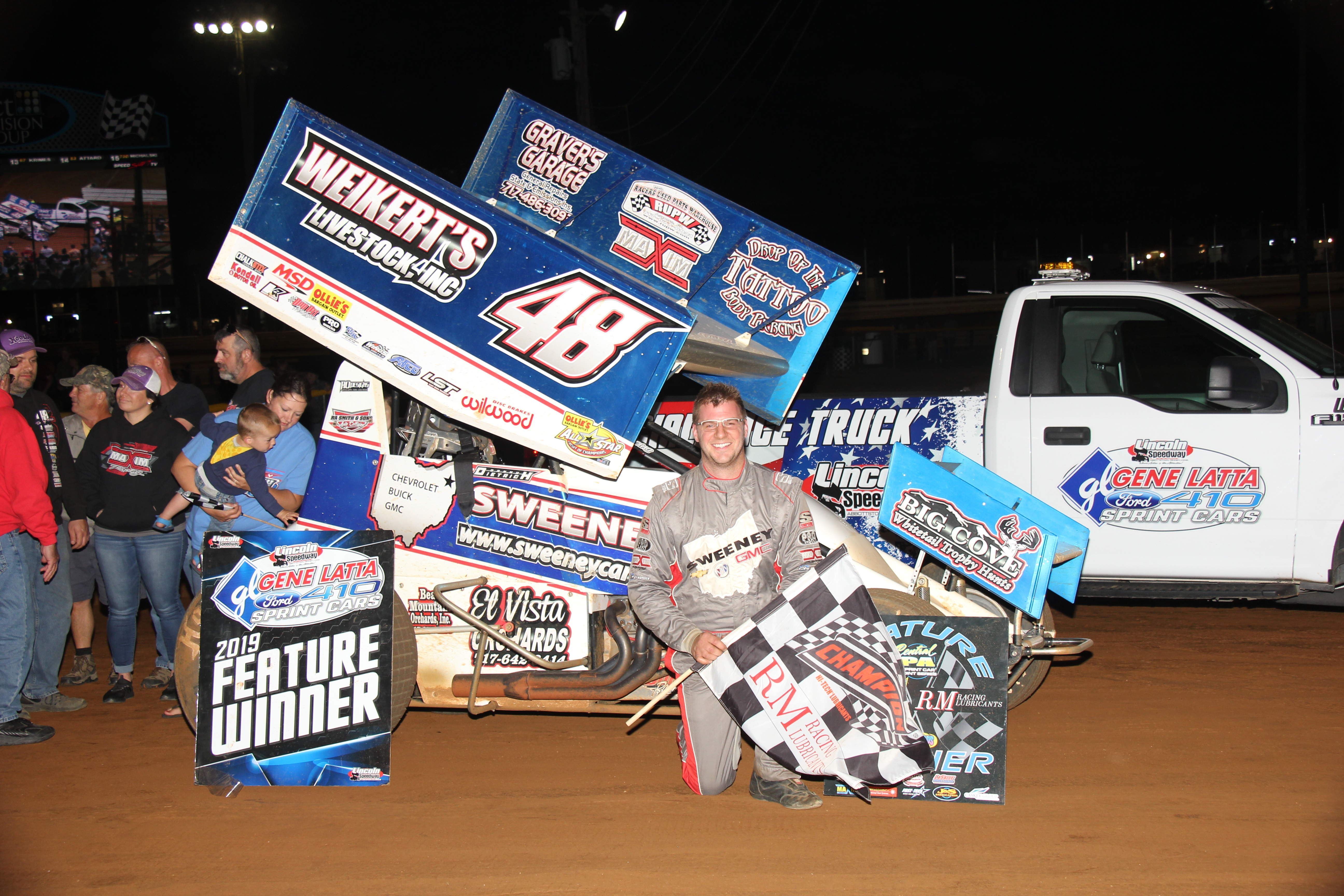 Abbottstown, PA (June 15, 2019) – Danny Dietrich has seen success in Central PA and pretty much wherever he travels in 2019 leading Central PA drivers with eight wins on the season going into Saturday night. The results were no different when Dietrich stopped by the Pigeon Hills to race on Saturday.

Pole-sitter, Joe Kata, lead the field to the green with Kyle Moody on the outside of row 1. Just as Kata slid up the track to hold off Moody out of turn 2, Trey Hivner landed upside down in turns 1 and 2 bringing out the red.

The field was lined up for a complete restart. This time Moody got out to the lead with Kata falling into second. The yellow came out on lap 1 for Jay Galloway after he spun out in turns 2. Galloway rejoined the field.

This time Moody led the field for a single file restart with Kata, Cole Young, Glenndon Forsythe and Bradley Howard lined up behind him.

Moody held onto the lead running the top of the track as Brian Montieth and Cory Haas battled for fifth with Montieth taking the spot.

It only took Moody five laps to catch the tail-end of the field. Just as Moody started to work his way through lapped traffic the caution came out on lap 6 for Cory Haas when he got spun around in turn 2.

Moody held the lead on the restart. A few laps after the restart Dietrich was working on Montieth for his fifth spot. It was a great battle with Dietrich taking over the spot-on lap 10. Moody started to work on his way through lapped traffic again on lap 10 while Young was working on Kata for second. Young took the spot on 12. Dietrich got around Forsythe for fourth on the same lap.

As Moody drove through lapped traffic Young closed in on the leader. Dietrich made his way to third on lap 18 to make it a three-way battle for the lead. With Young on the bottom of turns 3 and 4 Dietrich went high to take second on lap 19.

Dietrich went to work on Moody for the lead. Dietrich got under the leader going down the back stretch on lap 20 to take the top spot.

The red flag came out on lap 23 with Chad Trout on his side at the end of the front stretch.

Dietrich led Moody, Young, Montieth and Freddie Rahmer to the cone for a two-lap shoot-out. Dietrich went to the top of turns 1 and 2 with Moody sliding up the track to try and take the lead. Dietrich held onto the lead and beat Moody to the checkered flag by 1.540 seconds. Montieth crossed the line third. Rahmer finished fourth from his 13th starting spot and Young held on to finish fifth.

After a hot start to the season with wins in March and April, Wagaman was due for another win. With a 10th starting spot in the make-up feature from May 25, Wagaman would have to work through the field for his third win of the season.

CJ Tracy started on the pole of the 20-lap feature with Zach Euculano on his outside. Tracy took the lead as the green flag dropped. Steve Owings stopped on the front stretch before completing one lap setting up the field for a complete restart.

The yellow came out again before a lap was in the books for Kyle Denmyer and Dylan Orwig. Both drivers stopped in turn 4.

Third time’s the charm. Tracy took the lead on the field’s third attempt at a start with Euculano falling into second and Travis Scott running third.

The field saw the caution again on lap 1 when Tyler Ross and Wyatt Hinkle got together in turn 4. Ross came to a stop bringing out the caution flag.

Tracy held onto the lead again, this time on a single file restart. Wagaman quickly made his way up through the field and was running fourth on lap 6 as Tracy started to work through lapped traffic.

Lap 9 saw the fourth caution of the race. This time it was for the race leader, Tracy, who spun out in turn 2.

Euculano inherited the lead with Scott, Wagaman and Doug Hammaker lined up behind him for the restart.

Wagaman got under Scott driving down the backstretch on lap 13 to take the second spot. The red flag came out on lap 14 for Tyler Ross. Ross got upside down in turn 4.

The yellow came out again on the restart as Wagaman was making a run on Euculano for the lead. Dave Carlberg stopped on the backstretch.

With six laps to go the field lined up for another restart. The caution came out before another lap was completed. Scott got into the wall in turn 1 and nearly flipped while running third.

With both Wagaman and Hammaker challenging Euculano for the lead the seventh and final caution of the race came on lap 17 when Brett Strickler got spun around in turn 2. Strickler rejoined the field.

Wagaman tried the outside on the restart and couldn’t make the pass in turns 1 and 2. Wagaman went to the outside again in turns 3 and 4 and beat Euculano to the flag stand by a nose to take the lead. Both Hammaker and Dylan Norris followed getting around Euculano for second and third.

Wagaman held onto the lead and beat Hammaker to the line by .958 seconds for his third win of the season. Norris held onto third with Euculano finishing fourth. Cody Fletcher completed the top five.

Steve Owings didn’t complete a lap in the make-up feature held earlier in the night. With pole starting spot for the regularly scheduled feature Owings had the opportunity to turn his night around.

Owings shared the front row with Dave Carlberg who also had a rough showing in the first feature. Owings got out to the lead when the green flag dropped with Wyatt Hinkle making his was up to second. Jeff Rohrbaugh worked his way up to third with Dylan Norris running fourth.

The yellow flag came out on lap 5 for Carlberg who was stopped in turn 4.

Owings led the field to the cone for the single file restart with Hinkle, Rohrbaugh, Norris and Hammaker lined up behind him.

Hinkle, Rohrbaugh and Hammaker were in a three-way battle for second when the caution came out on lap 10 for Dylan Orwig when he spun out in turn 4. Hinkle had held onto the second spot but pulled into the pits during the caution. Rohrbaugh inherited the runner up spot for the restart.

Owings had a solid restart and created some distance between Rohrbaugh. Kevin Nouse got under Jeff Halligan for fourth, but Halligan stayed close trying to get his spot back.

The caution came out on lap 15 when Hammaker and Rohrbaugh made contact on the front stretch with Rohrbaugh coming to a stop.

A three-way battle for the lead ensued on the restart between Owings, Hammaker and Nouse.

The caution came out again on lap 18 for Orwig in turn 4.

Owings led the field to the cone for a two-lap shoot-out with Hammaker, Nouse, Halligan and Norris lined up behind him.

Hammaker made one last effort for the lead but Owings held him off and beat him to the checkered by .468 seconds. Nouse held onto third. Halligan crossed the line fourth and Norris finished fifth.

John Marks lined up seventh for the feature start and was the highest starting driver in the Sportsman Class.

Rickrode, driving the number 29 Kenn Weld tribute car, got out to the lead as the green flag dropped with Wrightstone right there to take the lead out of turn 2. Rickrode beat him back to the line to lead lap 1. Rickrode and Wrightstone were running wheel to wheel with Randy Minich watching the close battle in third.

Rickrode started to pull away on lap 2. Mark Hahn started to work on Minich for third as Rickrode caught the tail-end of the field on lap 9.

Hahn went to the bottom of the track to try and take third from Minich and the two drivers drag raced to the flag stand on lap 10. Hahn took the spot the following lap but Minich stayed close. Minich took the spot back on lap 14. The two continued to battle for the spot with Hahn getting the spot back again on lap 16.

Rickrode held onto the lead to win the overall feature and the Modified Class. Wrightstone crossed the line second. Hahn held onto third with Minich finishing fourth. John Marks won the Sportsman Class with his fifth-place finish.