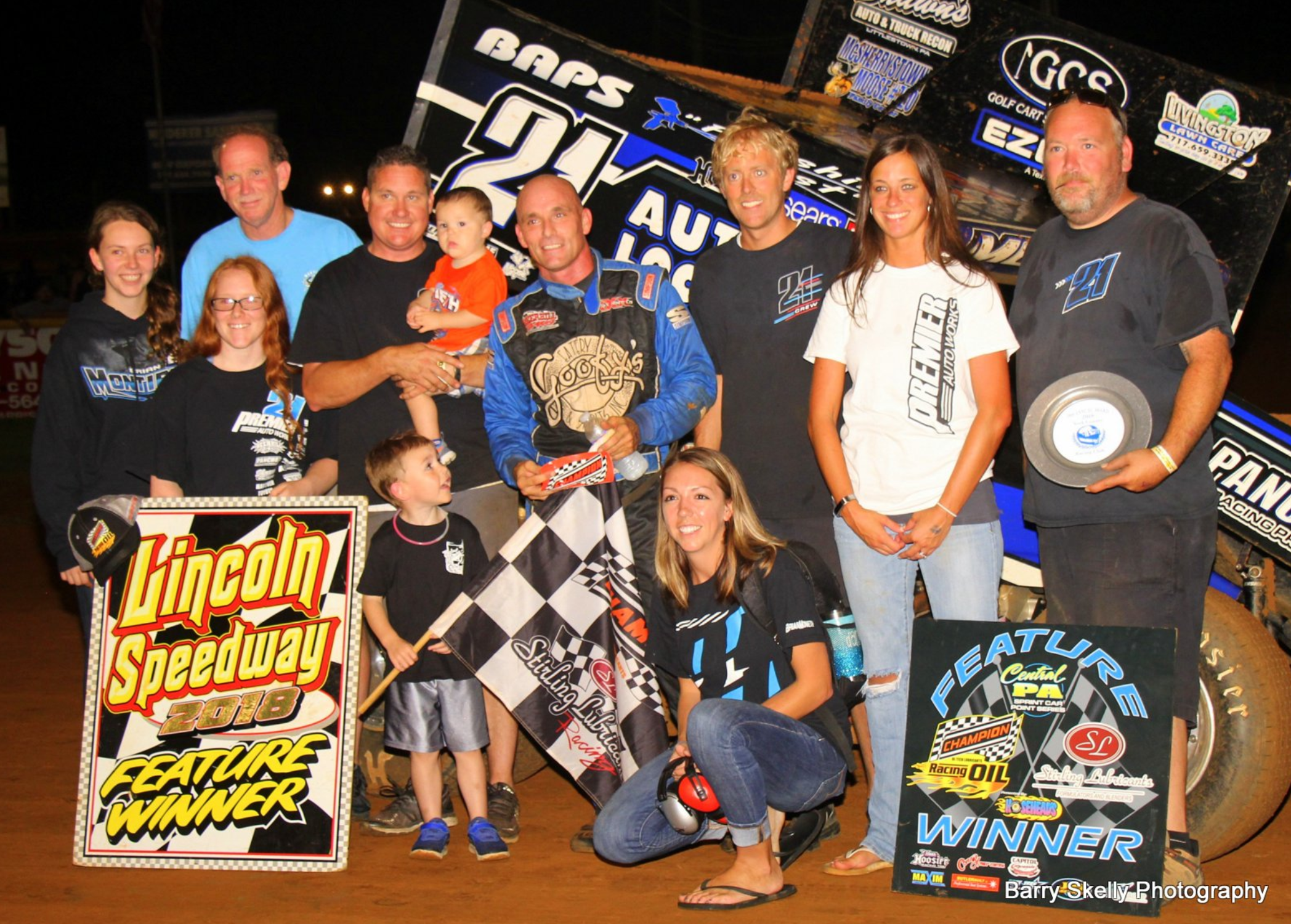 358 Sprint feature to be concluded Sept. 15th with 7 laps in the books; Street stocks cancelled

After celebrating his 44th birthday earlier in the week, Phoenixville racer Brian Montieth sat in victory lane once again on a Saturday night at the Fabulous Lincoln Speedway. In just under six and a half minutes, the driver affectionately called “The Edge” by his legion of fans, raced non-stop for 25 laps en route to his 60th career win at the Pigeon Hills oval.

“I had to make up for last week,” said Montieth with a smile, reflecting in his mishap a week earlier while battling Rahmer for the win. “I put us out of where we should have been…racing is racing though.”

With the 25-lap starting feature line-up determined by a heads-up alignment from the three heat race finishes, Montieth started fourth following his second place finish in the first heat.

“In the heat races you’ve definitely got to go,” Montieth exclaimed. “There ain’t no messing around or you’re going to start back where you don’t want to on a race track like this.”

Outside front row starter Landon Myers grabbed the lead at the outset over polesitter Scott Fisher. Montieth wasted no time and passed both third-starting Matt Campbell and Fisher before the end of the opening lap to move into second and set his sights on the leader.

After a close side-by-side battle for 2 laps, Montieth grabbed the lead from Myers on the fourth lap and began to pull away.

By the 10th lap Montieth had opened up a one and a half second advantage over Myers as he entered lapped traffic.

As the non-stop laps continued to click off, Montieth continued his assault through lapped traffic and increased his advantage to over four seconds after 17 laps as second place Myers had his hands full trying to hold off fifth-starting Tim Glatfelter for the runner-up spot.

With five laps to go Glatfelter finally secured second place from Myers. But all eyes looked behind him as last weeks’ feature winner Freddie Rahmer was charging to the front from his 12th starting spot.

Rahmer was able to get by Myers, Campbell and Glatfelter over the final four laps but ran out of laps as Montieth took the checkered unchallenged for his fifth win of 2018 at Lincoln, and, the 60th of his career.

“Triple-X, Rider, and, these Smith Titanium Brakes,” Montieth quickly pointed out. “I test’em (brakes) and they definitely work…anybody that knows me  knows we go through a lot of pads and this is the first set of pads  in pretty much my entire career that doesn’t go away no matter how hard I push on them.”

With six track titles already under his belt and only two Lawrence Chevrolet 410 Sprint point races on the 2018 schedule, Montieth stands to pick up his seventh track title in the last 11 years (2008, 2009, 2010, 2011, 2015, and 2017). Montieth currently holds a 280 point advantage over his nearest rival, Chad Trout, after his fifth win at Lincoln Saturdaynight.

Impressively, since Montieth’s first win at Lincoln on July 15th in 1995, he has recorded 59 more wins and stands alone in fifth place on the all-time win list with 60 total wins over the last 23 years.

Heats for the 22 410 Sprints were won by Fisher, Myers, and Campbell.

At the time the rain began to fall, halting the 20-lap feature after seven laps were in the books, sixth-starting Tyler Walton had just taken the lead from Chris Frank who had taken the lead form polesitter Brett Strickler on the second lap.

Heats for the 23 358 Sprints were won by Tyler Ross, Hartlaub, and Wagaman.

The final event of the evening, the 20-lap street stock feature, was also curtailed due to rain and could not be rescheduled on any of the remaining dates this season. To compensate, the special increased street stock purse for the evening by sponsor Pam Madden of P. Madden Accounting & Taxes was evenly divided to all 18 cars that qualified for the feature ($180 each).

Heats for the 20 Street Stocks were won by Jason Townsend and Ryan Smith.

Next Saturday night, August 25th, The ALL-STAR CIRCUIT OF CHAMPIONS come to Lincoln Speedway to take on the PA Posse and are joined by the Central PA Legends. Competition Pit gates will open at 5 PM, Spectator Pit Admission & General Admission gates will open at 5:30 PM. Hot laps will get underway at 7 PM, followed by time trials at 7:30 PM.